Finding your tribe and doing the (home)work

-words written his week: 4,000-4,500 (first part of novel and mostly-finished short story)
-using Scrivener to write, as well as Google Docs to share
-joined the Fantasy and Fantasy Writer's communities on reddit
-posted the first part of the story I'm working on and got a ton of useful feedback (have since posted the first draft of the NEW beginning of the story)
-asked for contemporary fantasy recommendations to see what's going on in fantasy today
-went to Indigo and picked up the four books in the pic below
-got a message from Michael J. Sullivan
-picked up The Death of Dulgath on Audible
-making solid progress on the first part of my novel, for better or worse
-reading Uprooted by Naomi Novik (150 pages in or so)
-keeping notes on vocab, phrases, metaphors, and writing techniques on my iPhone for books I'm reading or listening to
-check me out on Twitter and Goodreads

So, where and how do I begin my writing journey? Contemporary wisdom suggests the first step is finding my tribe: a group of like-minded people who share my passions and maybe some of my dreams. When you're a kid in school, this is easier; you interact with dozens of people every day, so you're bound to run into another awkward adolescent who's into Magic: The Gathering or Japanese role-playing games. You're so filthy rich in time as a kid that you end up taking much of it for granted.

Conversely, once you start amassing adult responsibilities, for most of us, the face-to-face element of nerding out and finding new people to nerd out with becomes another thing on the agenda, penciled in between "lunch with Dan" and "Kid's friend's birthday party." It doesn't matter if all you want to do is sit down with friends for a few sessions of Settlers of Catan, or finally take the time to learn how to play Dungeons & Dragons, time is a jackass to an adult - a merciless, unfeeling, disinterested force that keeps moving forward.

Luckily, the internet has made it easier to squeeze in nerd time, and a person no longer has to stumble around awkwardly hoping they'll run into someone new who's into the same nerd things they're into. I've always been lucky enough to find my tribe, whether online or in person. Given that I'm older and have a full-time and part-time job and a family, the "in person" part of the equation isn't always possible, so I've had to find other ways and places of squeezing in time for my interests.

A brief background to finding my tribe

I've been a fairly regular lurker and contributor to NEOGAF's monthly "What are you reading?" thread, which has a ton of fantasy and sci-fi recommendations, usually manifesting in a stream of book cover images with scraps of opinion here and there. There's also a NEOGAF writing community that posts fairly regular "Writing Challenge" threads, and I'll likely fire off some things in that direction, as I did all the way back in 2012. The people there are very helpful and kind, and a certain Mr. Gary Whitta, the writer of Book of Eli and a ton of other cross-media stories, grew from that community. I'm not sure how often he posts there anymore, as he's busy doing well-earned podcast and media tours, but good things can happen if you put yourself out there and connect with other people pushing in the same direction. I need something deeper and more specific than just these communities, though.

So, last week I finally opened up a Reddit account and went searching for fantasy genre communities. Lo and behold, I seem to have struck gold by stumbling upon the /r/fantasy subreddit and the /r/fantasywriters subreddit. The Fantasy Writers community is very active and is populated by both published and unpublished fantasy writers. You can post sections of your work (provided you share through Google docs) and request specific feedback, such as "Does this flow?" "Do you care about this character?" and whatever else you want a helpful set of eyes to focus on.

It was there that I posted the first draft of a story introduction I started back in December. (You can find the story and the feedback here if you're interested) The feedback was part encouraging, part scathing, and all useful. The reply by Albin_Hagberg_Medin near the bottom of the page is an entertaining opus of criticism if you have a few minutes. As my first entry into the world of fantasy criticism, it went well. In my professional life, I've learned to give and accept feedback, and I rarely - if ever - take things as personal affronts, because they're (almost) never meant that way, and that's the way I went into this community. So far, so good.

One of the most useful things I got from the feedback is that I really need to be reading more current works in the genre. I've admittedly been trying to catch up on books that are 30 to 60 years old in some cases, and fantasy has largely evolved since the heydays of Tolkien, Weis and Hickman, Eddings, Williams, et al. They're still fun to go back to, and I will periodically go back and read the stuff I've missed, but for my own craft to develop, and to be part of the active fantasy writing community, I really do need to see what's out there now.

I asked for some contemporary fantasy homework, and I was directed to the Fantasy community on reddit, where I created this thread and got a massive round of helpful recommendations. Inspired and motivated by the community's enthusiasm, I went to Indigo that same day and returned with my homework. 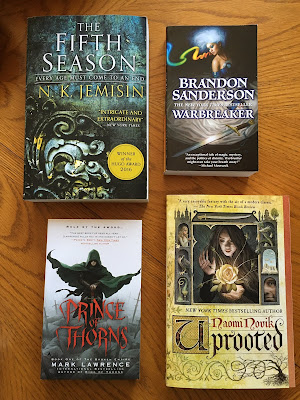 These books range from epic to adventure to apocalyptic to fairy tale, so I think I'll get a pretty good lay of the land in terms of the types of fantasy I myself am interested in writing. I've started with Uprooted by Naomi Novik, and I'm enjoying it a lot so far.

To study what I'm reading, I've opened up a new Note on my iPhone where I jot down evocative vocabulary, metaphors, and phrases that I come across. The vocabulary is largely common words, but maybe not the type you think of in the moment of writing, especially as a novice. These are words like unyielding, fling, hover, cower, cleanse, desperate, rush, purge, and others. Writing is a craft, and like all crafts, you have to become familiar and skilled with the tools at your disposal. Skills will only develop with daily practice and internalizing the words and advice of others who have already been at it far longer than I have. Speaking of which...

The coolest thing to come out of my reddit experience so far was coming home from Indigo and seeing a message from Michael J. Sullivan, an established and successful fantasy author, whose books I had just been glancing over while at Indigo. He recommended one of his books for homework and offered to send a free companion guide that tracked his own writing process while he was creating the story. I've just used my latest Audible credit on that very book: The Death of Dulgath. It's part of a series but is also supposed to work as a standalone. I'm looking forward to it, and I thanked Michael for immediately making me feel welcome into the broader fantasy writing community. Again, it's amazing what can happen when you just put yourself and your work out there.

Oh, that first story I posted above? I kept the characters and their main journeys in my mind, but totally changed the opening scene to add more urgency, and to provide a more solid motivation for the leads. It's the main novel I plan to work on throughout 2017, and I'm having a blast going through it while munching on books, and a ton of podcasts like Fiction School, The Writing Podcast, Writing Unblocked, Creative Writing Career, Kobo Writing Life, Writing Excuses, The Writing Show, Science Fiction & Fantasy Marketing Podcast, and The Self-Publishing Podcast. There is so much out there it's incredible. And it's free. Gratis. Za darmo. (Polish for free) You just have to be willing to get off your butt and look for it.

So, all that in about a week. Not bad. To finish off, I'll post a chunk of the latest section of the novel I'm working on. (it's a Google Doc) Feel free to leave feedback, or just cringe as you like. Thanks for reading!

Context: Taris and Meryl are a married couple who lost their daughter in a local market terrorist attack conducted by an apocalypse cult of religious fundamentalist dark wizards. Yeah. Trying to work on showing over telling here. Also, I know "Rivenblade" has a high cheese factor, but it's on purpose, as it was the surname given to Taris by the king after completing the swordsman trials years before this.