-got sick on Wednesday and will only be fully recovered tomorrow (Sunday)
-wrote about 2,500 words this week, plus 800 words of an outline to flesh out my story
-finished the audiobook of The Death of Dulgath. Excellent book
-read the 100-some-odd pages of Making The Death of Dulgath after getting it from Michael J. Sullivan in my inbox. Loved it and was inspired by it
-discovered some new features in Scrivener as a result of the book mentioned
-sent back a bunch of typos in the free book to Mr. Sullivan
-will finish Uprooted by Naomi Novik this week
-outlining is going well, and I've worked out the motivation for my big bad

The (not many) benefits of illness

I think it was the kids who did it.

Every year, I make a conscious effort to avoid sickness. I've been especially conscious of dodging germs since becoming a father four and a half years ago. That event changed the way I look at my own health and at the necessity of taking precautions to stay in the pink. (terrible idiom) I use paper towels to open public bathrooms. I steer clear of sick friends, family, and colleagues. I wash and sanitize my hands at work multiple times a day. All in all, I figure these habits are necessary if I plan to stay healthy, and I think I've subconsciously started taking pride in my ability to stay virus-free more than others I know.

Well, this week, a cold started gunning for me around Monday, walloped me by Wednesday, and knocked me down on Thursday and Friday. We're talking nose-like-a-faucet and painful-full-body-sneezing levels of cold here. I think I got it from my own kids who were both sick last week.

That said, the reason I was able to put almost anything onto the page this week was as a result of taking two necessary sick days and having a blanket wrapped around me while being confined to my home for forty-eight hours. Overall, I'd say that free time afforded me the luxury of being productive in both reading and writing, so it's not all bad. Right?

I listened to this wonderful audiobook this week. 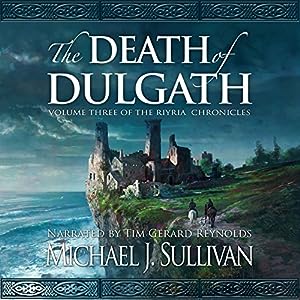 Just from a production quality standpoint, the narrator, Tim Gerard Reynolds, is phenomenal. I've listened to around 20 audiobooks since starting with Audible.com at this point, and this book ranks right up there in terms of engaging my ears with appropriate passion, distinct character voices, clear enunciation, and professional grade sound quality. Whatever he earned for his work on this book was well-deserved.

The book itself is also very good. The basic premise centers around a castle countess being the subject of an assassination attempt, and someone hiring a couple of salacious assassin mercenary types, Royce and Hadrian, to propose ways that someone would use to kill the countess, so that they could be ready for any attempt on her life. She's already survived three attempts in the past, and they'd like to ensure they're ready for a fourth. There's a lot more to it than that, including some nice hints of magic, but overall, this is a really enjoyable thriller wrapped in fantasy skin. I'd recommend it even if you're not usually into fantasy, as there's action, adventure, romance, death, friendship, and just about anything else you could think of when it comes to crafting an engaging yarn.

I'm now excited to jump into the rest of Ryria series. Yay. More books I need to find time for. 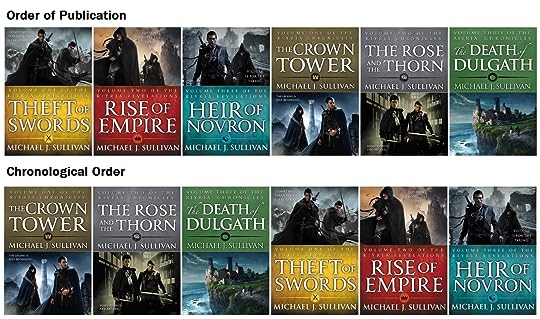 The Death of Dulgath also works as a stand-alone title, so check it out, like I did, if you don't want to commit yourself to a series, and if you just want to see if this world and these characters are for you.

In addition to the audiobook of The Death of Dulgath, I also received a free .pdf in my email of Behind the Book: Making The Death of Dulgath from Michael J. Sullivan himself. It's rare and awesome to see someone going this far out of their way to contact readers and to make new fans, but this guy does it. High five and a toast, sir. Thank you.

The book is awesome. It's just over a hundred pages, and it offers a ton of information on a wide variety of topics, such as: the struggles of publishing and creative control; Michael J. Sullivan's daily writing process; his daily word count goals; pictures of his first outlines for the book; notes on using Scrivener; and of course, how the book itself was formed and changed over time.

From the book, I learned that I really needed to be a little more thorough in my pre-planning when it comes to writing a novel, especially if I'm attempting to develop an entire world. I've been going off a basic idea in my head of what I want the book to be, but without having some tent poles in my mind of where it's going to begin, where it's going to end, and what the motivations of the characters are, it's going to be difficult. I thought I could do the pantsing (flying by the seat of your pants) thing that a lot of writers talk about, but I really wonder if the ability to write that way is a myth, like multi-tasking and good Ontario wine.

I also discovered that Scrivener has a name generator! It's really ingenious. Check this out... 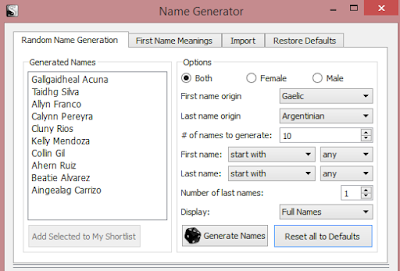 You can choose from a plethora of first and last name origins, then just keep hitting the "generate names" die at the bottom and pick and choose. Not only is this useful if you're going for naming consistency in a particular region of your world, but it's also SO. MUCH. FUN. Here, let me mix some "Canadian" first names with some "Scandinavian" last names:

Also, Natacha apparently falls in the Canadian first names category. Who knew? Gotta check out a PEI phone book or something. I could spend hours just playing with this thing alone, but then I'd never get to the important stuff. Speaking of which... (Segway. It's a segue. Did you know "segue" was spelled like that?)

Okay, so due to being housebound for two days, I managed to hammer out around 2,500 words of content this week. I can't always rely on getting sick to afford me opportunities to be productive, but I'll take it as a minor side benefit this week.

I'm not totally happy with the last scene I wrote, which is basically an audience between a swordsman and his king, but I'll flesh it out in the future.

If you're at all curious to see what I've come up with period for the book I'm writing this year, you can check it out here. There's even grief-stricken sex on page 6. I've asked if it feels "earned" so early on in the story, and the response has been positive from the Reddit Fantasy Writers community.

Like I mentioned above, I know I need to do more prep work before going too much further. This means research, world building, and character profiles and motivations. I've done this in bits and pieces up to this point, but at 5000+ words into the story, I'm realizing some of these details need to be better planned and known soon, so I'm taking a detour to focus on that this week. It's common writing wisdom, but if you know your world and characters deeply, as well as the basic story you want to tell, the writing itself will come much easier.

That's it for now. Thanks for reading if you've done so, and feel free to leave comments below. The first draft shit sandwich train continues, friends.
at January 28, 2017