I wrote three thousand words over the past week, which is awesome from a productivity standpoint. I kept myself disciplined and wrote practically every evening, and one morning where I woke up at 5am. The thing is, if I just write three hundred words per day, that's over two thousand at the end of the week. I feel there's no excuse for me not to hit that number on a consistent basis, but I won't beat myself up about it if I don't. Life and fatigue have a habit of getting in the way from time to time.

The only problem with my most recent cluster of words is that a chunk of them felt like filler. I'm trying to make them feel like connective tissue from one part of the story to the next, but it's hard to view them in that light knowing I just used discovery writing and made up this section of the journey as I went along. I know the next major event in my story, but getting there is something I'm feeling my way through. Having listened to other writers talk about their processes, even big names like Brandon Sanderson, this is not an uncommon approach. Basically, as long as you have your story tent poles set up along the way, you can allow creativity to take over in between.

Anyway, if you want to see what I produced over the past seven days, you can check it out here. Here's how it starts if you're not sure whether you want to invest your time:

The clouds had gathered like thieves in the night and rained daggers over the Grasslands. It was the kind of rainfall that pelted and stung, not soothed. The horses kept their stubborn pace by moonlight, as Meryl huddled deeper into her cloak, Taris alongside. The worst part was the complete lack of cover with not a tree or cliff in sight. Meryl did her best to shield her pouch of provisions from threat of the damp.

The Grasslands seemed to stretch endlessly. The landscape was mostly flat with hill clusters popping up now and then. It was virgin territory, but Meryl wondered how long it would take some avaricious ruler to start digging them up and laying them over with stone.

She also wondered how long they could ride in this downpour.

Thanks for reading, and I welcome your honest feedback and/or advice.

Gods of fiction, Gods of myth

On the reading side of things, I'm over two hundred pages into Warbreaker by Brandon Sanderson. This could be one of my favourite fantasy novels ever if it keeps developing the way it has up to this point. The way gods are used and abused in the story is fascinating, and Sanderson does a great job of building mystery and anticipation. He's basically laying down a breadcrumb trail trying to get the reader to figure out just what the hell is going on behind the divine politics of a city which resurrects the dead and then keeps them alive by having them take "the breath" of a regular person once per week. It's weird and wonderful and just great. I'll see how I feel by the end of it, as I imagine this type of story would lose something on a re-read once you know the mystery going on. However, as a first time experience, it's been a fun ride.

With my latest Audible credit, I purchased Norse Mythology by Neil Gaiman just yesterday. I've been fascinated by the norse myths, and myths in general, for a long time. I have books and a gorgeous illustrated encyclopedia on the subject. The problem with myth is that it's filled with too many names, and the stories just stand on their own, often with no link to other parts of the greater mythology. When there is overlap between a story, it's up to you to remember that god x hooked up with goddess y to create new god w who now wants to kill god z because god z wants to usurp the throne from god x, who actually usurped it from god p, who was given it by god a. So...I love myth, but it's not the easiest thing to create a chronology out of.

With that in mind, I'm enjoying Neil Gaiman's attempt at explaining the major Norse myths in what appears to be a semi-chronological order. They're also told with Gaiman's usual mix of humour and word craft, and I'm enjoying listening to the author himself read the text. Oh, and Thor is amazing. I feel like his depiction in Marvel comics only scratches the surface of his depth and greatness after learning more about his cunning and strength. If you like trickery, death, and larger than life feats and characters, I'd recommend this. With that in mind, I'm off to bed and will end this with an image of said badass thunder god. 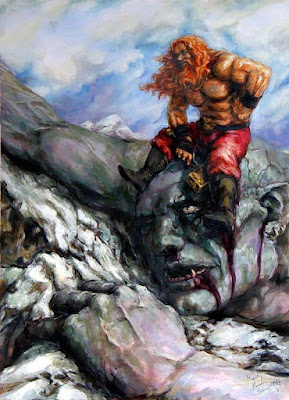