I started the week off great. I wrote a combined eleven hundred words on Monday and Tuesday, but the story just wasn't clicking for me. Basically, my characters were traveling to the capital city of my story world because they wanted to have an audience with the king. They met an old guy on the road who used to live in the capital, but has since become a nomad. He gave them the names of two people to seek out once they get to the capital, as they could at least show my main characters around, and potentially help them to arrange the desired meeting with the king.

So I then had my characters travel through some mountains on the way to the capital, and I started writing a scene where they were accosted by some bandits and were taken prisoner. The issue was that I really just needed to get them to the capital to keep the main story rolling, and I couldn't think of a way for them to escape from the bandits in an efficient way. (who are actually part of the terrorist faction that killed my main characters' kid) After setting up the two characters to meet in the capital, I felt this detour was going to take too long, and that I'd be breaking a promise to the reader. I just needed to get my characters to the damn capital!

On Wednesday, I scrapped the whole scenario and got the idea of my male lead simply having a symbolic dream relating to the death of his daughter while traveling through the same mountains mentioned above. The scene causes some questions to be asked, has some character and world development, and it doesn't feel like the story takes a major detour. In this scenario, the characters are both still moving forward, and when the guy wakes up, he still gets to ask questions, but quickly gets to continue on with the journey.

You can read the dream sequence here. My apologies for the formatting. (and the writing quality)

I've already gone through various periods of feeling like my writing is garbage, but I'm going to keep pushing forward until this story is done. My goal is to have the first draft completed by the end of October. I'm a little behind the pace at the moment, and I'll be happy to get it done by the end of the year if needed, but I'm really hoping to have some revising time at the end of the year before getting an editor to look at it and either a) tell me it's crap or b) tell me there's something that can be improved and maybe made readable. I'm also good with just being told to "keep practicing."

Like I said at the start of this journey, I'm buckling myself in for the long haul. Even if it takes ten years or more, I want to improve my ability in this craft and eventually create something worthy of being put out for public consumption.

Getting back to my writing week, after the dream sequence, I actually wrote the sequence in which the characters reach the capital and enter it for the first time. I got some tremendous feedback on those words from the Reddit fantasy writers community, so I'll be revising that bit over the next few days, or I'll copy and paste the feedback into my Scrivener file for now and come back to it at a later date.

Once I do revise this bit, I'll see if I can post the original piece, the feedback, and the revised piece for reference.

What I'm realizing more and more is that I do need regular feedback. It helps to have another set of eyes on this stuff, especially ones with experience in the field. For now, I'm going to stick to leaning on the Reddit group a bit, though I don't want to press too much there, as the community is not an editing service and is meant to be used as more of a discussion circle if you get stuck in your story or need a little feedback on a plot point. In the future, I may consider getting a writing coach or taking something like one of David Farland's courses.

In short, I'm going to keep doing the work while seeking seasoned feedback.

Thor in a bridal gown

I finished the audio book of Norse Mythology by Neil Gaiman last week. I actually listened to it three times, and I'll probably run through it a fourth time as well. It's only six and a half hours, and Neil Gaiman's voice is smooth as silk. He does a really nice job with the narration, and you can tell he's really passionate about his subject matter. I also want to go back again just to catch more details, as there are tons of place and character names, and some of the events happen pretty quickly. All in all, it's a fun book and retelling of some truly fantastic stories. It even has Thor in a bridal gown, which leads to an entertaining faux wedding scene.

Otherwise, I'm still making my way through Warbreaker by Brandon Sanderson. It took a backseat to Norse Mythology last week, but I expect I'll finish it in the next week or week and a half.

If you've made it down this far and haven't lost interest, yaaaaay. Thank you. I'm more than a bit tired at the moment, and I'm slightly annoyed by my own lifeless writing style, but I'm hoping it'll come alive the more I sit down, practice, study, and practice some more. Even when I don't feel like it.

In the words of Stephen King... 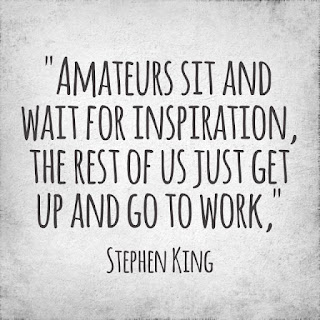