Two short stories posted in one day? Gasp. I've actually been sitting on this one since January, and added the final five hundred words to it today. It's my attempt at fantasy comedy and is about an elf who falls into a well, and the sassy unicorn who comes to his rescue. Feel free to leave your thoughts in the comments.

Hey, I finished a short story for the current NeoGAF Writing Challenge! It's more sci-fi than fantasy, and I'm actually pretty happy with it overall.

I started with the basic idea of a small team of space marines and a reluctant telepath working together to find out what's going on in a mysterious cave. From there, I tried to focus on motion, dialogue, and personality development. The climactic reveal was something that just popped into my head today while I was walking home from work, and I think it's serviceable, if not terribly original. I would have added more details if the writing challenge didn't have a word count limit, but as I said, I'm still quite pleased with this one overall.

Check it out and let me know what you think.

The best part is that I'm way ahead of the submission deadline for the challenge and will be able to refocus on the book for the next seven days. Bring it on!

Not a great number, as I'm looking at two thousand as the bare minimum every seven days. That said, I won't beat myself up about it. I drove seven hours with my wife and kids to visit my parents, and between playing Joking Hazard and Marvel Munchkin (both of which are top tier games to play with friends) until two in the morning on a Friday, and attending a birthday party in a reception hall on Saturday night, it just wasn't going to happen.

I'm continuing my efforts to streamline my style to just focus on telling the story instead of trying to focus on overdoing it with flowery prose and metaphors. In short, I'm just trying to write as quickly and clearly as possible. The flowery stuff can come in editing if needed.

Taris and Meryl packed their bags and headed out early into the city. Taris suggested they walk to get a better sense of the place, and because horses were not the most efficient mode of transportation in densely populated areas. Plus, they still had a lot of time before noon and their meeting with Moth and Dinah. Unless Orlan was wrong, Taris thought, We don’t even know how long ago he was here.

He didn’t dare turn his thoughts into words in front of Meryl.

They got their weapons from the front and stepped out of the inn. The cobblestones were bathed in the gentle light of morning, and everywhere, people were beginning their daily rounds. Even though the amount of bodies was less than they’d seen the afternoon before, witnessing so much life so early in the morning made Taris cock his head left and right despite his best efforts to seem calm and collected in front of Meryl.

We’ll get used to it, he told himself. It’s just like Kingsroot but bigger and with more people. Framing it that way made it easier to deal with his new surroundings. At least in spurts.

So there you have it. Oddly enough, I feel a little stuck mentally at the moment, but I'll push on through and get to the next scene soon enough.

Oh, and I ended up fifth out of eight on the NeoGAF Writing Challenge I posted about a while ago. Probably deserved that spot based on the work I produced. I wasn't happy with it either, and I'm looking forward to making a better impression and improving my work for the next challenge.

That's all for now. I won't even mention how I'm still trudging through the final one hundred and some-odd pages of Warbreaker. Instead, I'll tease a post I intend to make about Disney's wonderful adventure film, Moana.

OMG The Legend of Zelda; Breath of the Wild looks absolutely incredible and I wish I had the money to buy it and the time to play it AHHHHH! 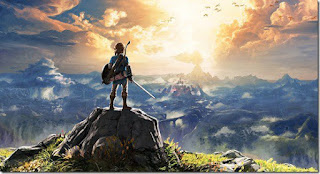 Seriously, just looking at this thing and watching videos of it is inspiring me to create better art. It looks and sounds gorgeous.

It was an interesting week. I started it by continuing the book I'm working on, and ended up writing a short story to finish things off . Here are my total word count figures from the past seven days:

I like the sound of "the book." I think I'll keep referring to it as that from now on instead of wavering between "the story I'm working on" and "the book I'm writing." So, the book is advancing at a decent pace. It's still incredibly rough and well on its way to ending up a shit sandwich, but that's okay.

(Hmm, maybe I should refer to it as the shit sandwich instead of the book? The self deprecation would either result in lazy don't-give-a-damn writing or just end up making the process even more fun than it already is.
...

Nah, let's stick with the book.)

So, why did I end up writing a short story? I mentioned in a previous post that I used to mildly participate in some writing challenges on the NeoGAF forums. Well, I decided to participate in the latest writing challenge thread. To make it feel like it's still contributing to the book, I wrote a short story that takes place in the same universe, just a few years before.

The writing challenge has a word limit of two thousand words, which I went over, so the version I submitted is very cut down and missing close to six hundred words that are in the full story. All in all, I'm not really happy with either version of it, but I submitted it anyway because any feedback is good feedback at this point. If you want to check out what I submitted, read post #27.

In terms of the book, I got a lot of feedback from the Reddit Fantasy Writers subreddit. The most valuable thing I took from all the comments was this:

"I think OP is focused on the trees rather than the woods here. He needs to really push forward with the substance and get it all out on paper or screen rather than second-guess every scene. He is fixated on individual metaphors which end up being worked to death at the expense of actual story substance."

I think there's something to this; I've been asking for too much feedback instead of just writing and pushing on until the end. So that's something I've decided to focus on moving forward. I've also tried to adapt my style to be more direct instead of flowery. With that in mind, I'll copy and paste the last little chunk I wrote after receiving the feedback above: (apologies for the formatting)

Taris shut the door and drowned the outside noise. The smell of pine permeated the air, and a throw rug softened his and Meryl’s footfalls as they entered. Taris welcomed the sensation after two days of earth, stone, and stirrups beneath his feet. A man and a woman sat at a table in the corner, a pitcher of ale between them. To the right, a middle-aged innkeeper stood behind a counter. He was thin, well-groomed, and wore a dark blue jerkin with a grey shirt underneath.
Taris and Meryl walked up to the man.
“Good evening,” he said, smiling politely, “Will you be needing a room?”
“Yes,” Taris said.
“Common room or private?”
“Common.”
“For how long?”
“Just one night for now. Maybe more.”
“That’s fine. Anything else?”
“We’ve got two horses.”
“No problem at all. We’ve a stable in the back. It’s ten coppers a night, and two coppers per horse.”
Taris reached into his money pouch and put the coppers on the counter. The innkeeper took them and continued smiling, pleased with the sight of coin. His eyes fell to the blade at Taris’ side, and to Meryl’s short dagger.
“I’m afraid we don’t allow arms in the rooms. You can leave them with me and pick them up on the way out.”
Taris felt a tinge of discomfort, used to the heft at his side. More than that, whether paranoid or not, he wanted to be ready for any sudden attacks. Still, rules were rules, and this wasn’t the time to be ruffling feathers. They unfastened their weapons and handed them over to the innkeeper, who swept them off and behind the counter.
“Follow me, please.”
He showed them to the common room opposite the counter. It was small but clean with six beds, three to a side; it looked nicer than any room Taris had ever slept in.
“Here you are. If you’re hungry, we’ve got bread, cheese, or stew if you’d like something hot. Just ask at the counter. The outhouse is in the back beside the stables. Will you be needing anything else at the moment?”
“Yes,” Taris said, “Could you tell us how to find the Howling Wolf?”
The man’s face beamed. “Of course. That’s my cousin’s tavern in the northwest of the kingdom. Best mutton in all of Dunsmire. It’s past the slums and at the end of the main road. You can’t miss it.”
“Thank you,” Taris said. “Anything else we should know? We haven’t been in Dunsmire in a few years.” His face stayed neutral in the lie. He wasn’t well-traveled, but he knew better than to admit he was brand new to a place. He wanted to fit in.
“Not much has changed. We’ve still got the markets in the southeast, the castle in the north, and if you’re looking for a temple of Valaron, they built a new one just east of that.”
Taris felt his heart jump at the mention of the temple.
“Thank you for your help,” Meryl chimed in. “We are grateful.” She nudged Taris and they went into the common room.

So there you have it. If that gave you any type of impression, whether negative or positive, I welcome the feedback.

In terms of reading, I'll say that I'm still working my way through Brandon Sanderson's Warbreaker; I've got less than two hundred pages to go. It's taken me longer than I would have liked, but I got distracted by listening to Neil Gaiman's Norse Mythology three times, and I also started listening to The Death of Dulgath again...and realized it's an even finer book than I originally gave it credit for. Michael J. Sullivan's sentences are super refined, and I can only hope to be that clear, precise, and poetic one of these days. I'll get there eventually. I hope. Yeah. I will.

To end things off, here are some more words of wisdom and motivation, as I struggle to find my own voice in the void of the internet, and to keep pushing myself to create without panicking about criticism:

“To gain your own voice, you have to forget about having it heard.”
—Allen Ginsberg, WD
at March 06, 2017 No comments: