With the possible exception of hyperspace travel, no long journey is a straight line. Taking into account that hyperspace travel is currently and will likely always be an imaginative flight of fancy, much to the chagrin of the scientific community and to myself, the second statement stands true in all cases.

And it has been true for me lately.

I ran into a snag since my last check-in. The name of said snag was discouragement. That's the name I'm giving it anyway, if a snag can be given a name at all. The discouragement was brought on by hitting a narrative wall in my book. Specifically, I had reached around twenty thousand words in it, which is a quarter of the way to completing my first draft and a reason for a mini-celebration, but then I stopped. Because I didn't know what to do next.

My characters didn't know what to do next.

So I sat. And I didn't write. For one day, two days, three days - easily more days than I should have. In that time, I tried reading A Tale of Two Cities by Charles Dickens at the recommendation of a friend, the experience of which I loathed so much that I gave up on the novel despite finishing around seventy percent of it, all over the course of an agonizing four weeks. Of the seventy percent I completed, I estimate that I probably only enjoyed around fifteen of it. Sorry Mr. Dickens, and sorry to anyone I may offend by admitting to not enjoying the aforementioned Mr. Dickens. In truth, there are too many books that I can love and be inspired by for me to try to finish books that I think I'm supposed to like based on the tastes of literary historians.

To be fair, I've enjoyed my fair share of classics, but Dickens is not a writer I'll be going back to any time soon. No sir. Keep your dusty (though still vastly superior to mine) prose far away from me. They're more interesting as an idea than as an experienced reality, though I respect that they may be more enjoyable in a classroom setting where greater context and analysis is provided.

After Dickens, I needed a palate cleanser, so I listened to this offering from the Great Courses series: 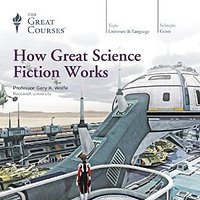 It was very good and was a nice trip down memory lane for me. After listening to it, I realized that I had actually read a pretty hefty chunk of the most seminal sci-fi works in the genre's history. I was also introduced to a bunch of books I haven't read and will read moving forward. I actually debated whether or not to get this book/lecture series with my Audible credit because my current focus is on writing fantasy exclusively, but it was a damn fine diversion in any case.

After that, I re-listened to On Writing by Stephen King and felt inspired all over again, and I'm currently re-listening to Bird by Bird by Anne Lamott. I feel I need to have both of these in print, or at least have specific passages printed on a wall behind the kitchen table where I do the bulk of my writing. They're both excellent, and I'd recommend them as must-buys for anyone with any interest at all in writing.

So, here I am again. I only started looking at my book again two days ago and have added a respectable one thousand words in that time. I'm trying to commit to writing a minimum of three hundred words per day, be that for the book or otherwise. As long as I'm writing. As long as I'm telling the truth or trying to. And I am trying to.