How we measure success

I'm writing a massive battle scene that is the first major pivot point of my book. It will take the story to around fifty percent completion, and I expect it to take many thousands of words to write. The hard part of this is not to let my imagination be too dominated by the awesome scenes of castle siege warfare from the Lord of the Rings movies, but that's where my mind is automatically going. Still, I'm trying to keep it fresh, and I'm enjoying the process and am also doing research along the way.

One of the bits of research that was key to the part of the book just before this one was: where do the soldiers live? What do soldiers do during times of peace? What did they do in the middle ages? I've basically just had them continue training in their barracks, which I think is believable enough. Funny that all I could think of were the months I spent playing the first Warcraft PC game the moment I started using the word "barracks" in my story.

All that to say, another productive week. If anyone ever asks me in twenty years, "How did you write so many books?" my answer will be "with three hundred shitty words per day" to riff on this story that Mark Manson wrote in his blog a while ago.

Who's Mark Manson? A blogger, but I know him more as the author of this little gem of a book: 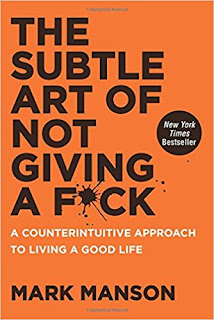 I used my Audible credit to get the audiobook version, and I'm forty five minutes away from finishing it for the second time. It has its faults and I have the usual complaints that I have with most catch-all philosophy books written for public consumption (i.e. soft research, generalized claims about the world, and trying to touch on too many things in one book), but it's quite illuminating in so much of what it says about life. It's basically a crass-but-not-so-explicit-it-makes-you-want-to-roll-your-eyes advocate for Buddhism and the idea that life isn't about finding happiness, but about accepting that pain, suffering, and problems are just part of existence. The main idea, as I understand it, is that you shouldn't be trying to fix all of your problems, but that you should be looking to find better problems in your life. Instead of only asking "What do I want out of life?" ask yourself, "What kind of pain do I want in my life?"

Anyway, don't leave it to me to sell you on it. If you're tired of overly-positive books about never giving up and doing all you can to achieve your dreams, this is a refreshing punch to the gut. I totally recommend it, and it's something that I'll be listening to from time to time to keep myself grounded and focused.

How does this relate to writing? Well, this book is really about what we choose to value in our lives and how we measure success in our lives. It uses the example of Dave Mustaine, the former guitarist of Metallica who got kicked out the band, formed Megadeth, sold over twenty five million albums, toured the world, and still felt like a failure all because of how he chose to measure his success: to sell more records and to be more popular than the band who kicked him to the curb.

Of course, it's utterly ridiculous for Mustaine to compare himself to one of the biggest rock metal bands in history, but it was his choice to measure his success that way, which left him feeling like a failure until later on in life. The lesson: set realistic expectations and realistic benchmarks when measuring your own success.

Yes, I could compare myself to Stephen King or J.K. Rowling, but that would be ludicrous and incredibly unrealistic, especially with where I'm at now. A more realistic goal is simply "try to write three hundred words per day consistently." That's how I'm choosing to measure my success. It's the process that's the rewarding part - the feeling that you're doing something you enjoy and are getting better at it.

So, in terms of what I choose to value and how I measure my success, I'm choosing to value creative output and measuring it by simply checking myself and making sure I hit my daily word goal. That's it. And that's good enough, as it's been keeping me grounded and content, so I'm just going to keep doing it, one word at a time.